By Hannah Dicus and Taylor Swift  |  October 23, 2018
​Minecraft Education Edition is an academic spin-off of the popular sandbox game. This review will cover the gameplay experience as well as the production history and highlight the educational benefits of using this software in the classroom.

Anyone who has been around young, videogame-loving children knows about Minecraft, the 3D crafting game that took the world by storm in 2011. As of 2018 it is the second best-selling videogame in the world after Tetris.[1] This success has attracted the attention of many, including Microsoft, which bought Mojang for $2.5 billion in 2014.[2] This was a strategic move to extend Microsoft’s influence over the younger generation, and it gave rise to the program we’re talking about today: Minecraft Education Edition. Now, this adaptation isn’t entirely Microsoft’s idea. Since it’s official release, Minecraft had an educational mode called MinecraftEdu. It was licensed by Mojang, but developed and owned by TeacherGaming, a production team composed of programmers and educators from the United States and Finland. This version of the game used the original openworld sandbox format while providing lesson plans and activities designed for the game as well as management tools for teachers. Originally, MinecraftEdu was not a part of Microsoft’s purchase and was still the property of TeacherGaming. The CEO, Santeri Koivisto, turned down multiple offers from Microsoft before finally settling in early 2016.2 Once acquired, Microsoft essentially did an overhaul of this version and renamed it Minecraft Education Edition. It went through a four-month beta testing period before being officially released on November 1, 2016. 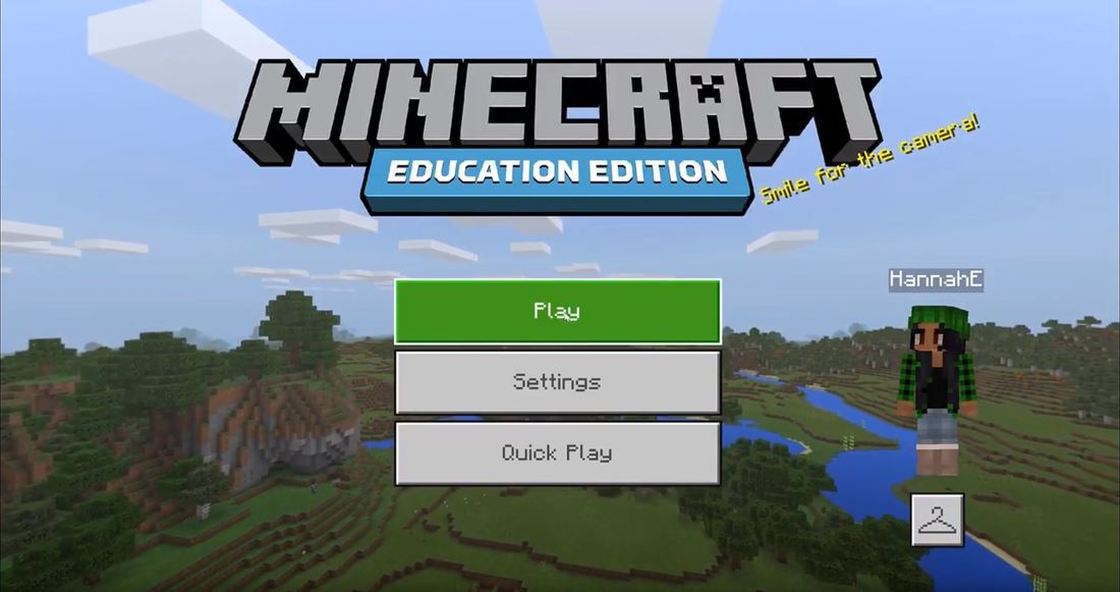 Users who already owned MinecraftEdu were given a full year of free use, but there were some complications that came with this transition. MinecraftEdu had an online archive called the World Library, where educators could post and download custom worlds to use during lessons. All of this was lost during when MEE came out, as the old worlds were not compatible with the new version. A new archive had to be made from scratch and is now available on the official website. There was also frustration at the necessity to login using a Microsoft 365 account. Many teachers with younger students found this to be an obstacle that caused password issues and lockouts. Many features of the game had been changed, such as which controls teachers had to monitor their students with and the way worlds were imported and exported. Needless to say that all of these changes were off-putting for MinecraftEdu’s original user base and many were not receptive to this update. However, Microsoft support was very attentive to these issues, and has since added many updates and patches to satisfy both the old and the new users. Despite its initial cold reception, MEE had many new, beneficial features to offer. The base game includes several game modes revolving around certain subjects such as chemistry and coding. It also introduced the camera and portfolio options, which allows students to document their work. These features, alongside the online training and mentoring resources available on the website create an approachable, user-friendly experience for students and educators of all ages and proficiencies. This can be shown by MEE’s reach within the academic world; Microsoft has done several case studies with both K-12 schools and institutes of higher education using this version of the game. There have also been collaborations with multiple organizations to add more to the game. Last year Houghton Mifflin Harcourt, an educational publishing company, recreated the famous retro game The Oregon Trail within MEE.[3] Also, Microsoft has partnered with multiple programming organizations such as Scratch, Code.org, and Tynker in order to utilize their programs within the code building game mode.[4] MEE has come a long way since its initial release and it is still being modified and updated to be as effective as possible. Currently it is only available on PC/Mac and iPad, but it is already having a momentous social and cultural impact on today’s youth. 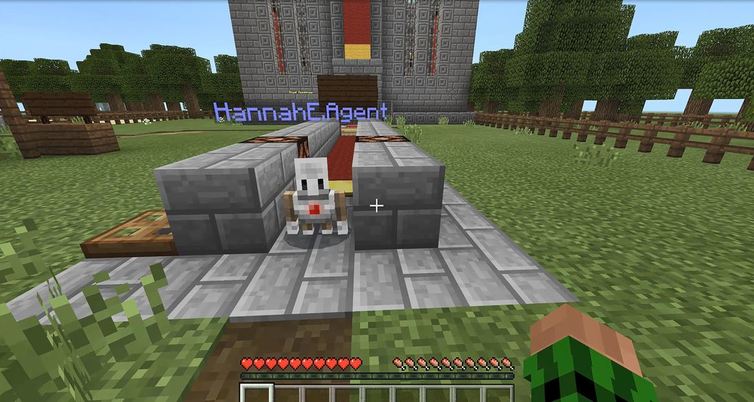 Your agent in Minecraft Education Edition Code Builder mode.
If you are familiar with the gameplay of Minecraft, MEE will come easily to you. Before entering the game, you must create a server and decide what game mode you want to play in and the difficulty. Once you enter the game, you will be free to explore and interact with the world depending on which settings you chose. For instance, if you are in survival mode, it is necessary to collect materials to build with as well as fight off enemies that can harm you or your structures. Creative mode, which is ideal for academic settings, provides the user with infinite building materials and strips away the need to manage hunger or health. It also allows players to easily destroy blocks and gives them the ability to fly for faster travel. This may seem like too much authority to give to a group of students, which is why the game allows the host of the server (normally the teacher) to restrict these freedoms as they see fit. The game comes with multiple pre-installed tutorials that serve to introduce you to its different game modes. In the chemistry tutorial, the player is taught how to create elements by using a sliding scale to choose the number of protons, neutrons, and electrons in each atom. You can then combine elements together to form compounds, which can be used to interact with the world around you. In the code building tutorial, students are taught to use a visual programming language by maneuvering an NPC called their “agent” around obstacle courses and prompting it to complete tasks for them. Make note that in order to use this game mode, you must first download a separate application called Code Connection that you open up alongside Minecraft. These game modes are well designed for their respective subjects and the tutorial levels are easy for the instructors to manage in a server full of students. ​ 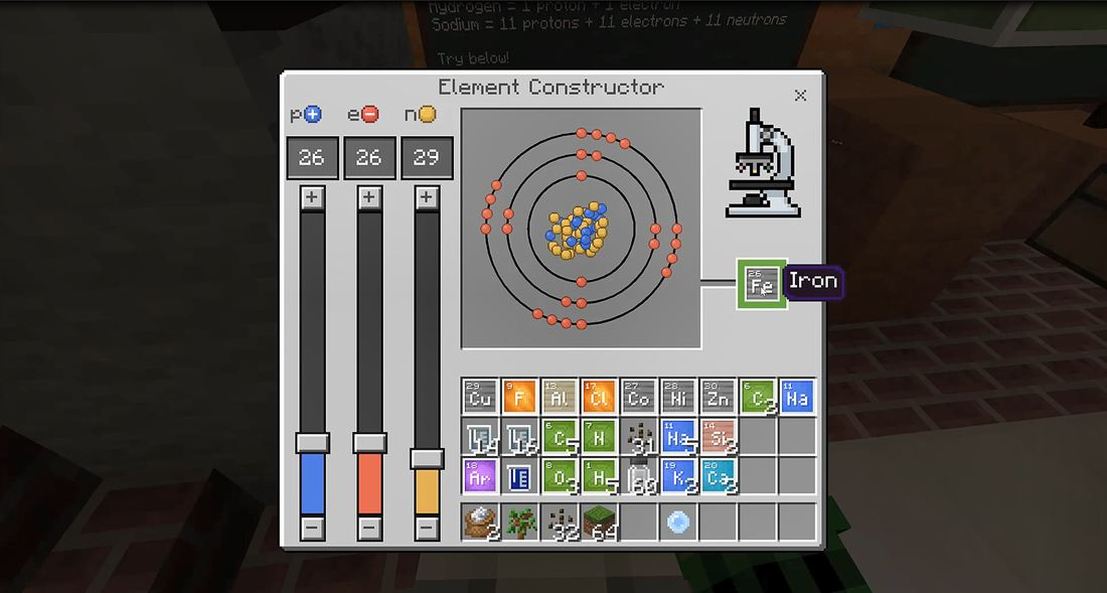 The element constructor in Minecraft Education Edition Chemistry mode.
A MEE server can support about 30 players including the host. This makes it ideal for grade schools and small college classes, but not so much for large lecture classes. Many teachers use the program to teach students about collaboration, problem-solving, and social and emotional learning (SEL), so perhaps the smaller servers could be good thing in the long run. According to Microsoft, MEE currently has over 2 million registered users from 115 countries around the world. These users have created an expansive online community where teachers and students alike can participate. Over 250 lesson plans have been shared via this community.[5] In addition to the lesson plans, there are over 300 mentors that come from 70 different countries in the Minecraft 2018 mentor cohort, and they are dedicated to helping others teach and play with Minecraft.[6] The rules and goals of MEE are defined by the lesson plan that the educator has created or chosen.4 This means that the objectives of MEE are different for each course or world. While the purpose for each world may be different, they all lead back to the same goal, which is to educate the students in an interactive, hands-on environment.  ​

MEE differs from the original Minecraft in the sense that it does not have extensive mod compatibility. It cannot be modded, likely to prevent students from getting distracted or to minimize compatibility issues in multiplayer servers. Custom avatars are also not allowed. Your game can be saved locally only if you are in a single player game, however worlds can be exported and installed on other computers. Essentially, if you want to keep your buildings from being lost or vandalized, create them in singleplayer. When you want to share them or collaborate, make a copy and set the new world to multiplayer. While game mode tutorials are provided, they are much more like broad walkthroughs of features rather than fully-fledged courses. Educators are highly encouraged to create their own lessons or find ones from the community that fit their goals and the needs of their students. MEE is designed with convenience in mind. The default controls are WASD to move, ‘e’ to access your inventory, and spacebar to jump (or fly if you are in creative mode). Additionally, the mouse (or touchpad) is used to look around, place or destroy blocks, and interact with things such as treasure chests and doors. These controls can be modified in the settings. The game also has touch screen and controller support. The difficulty settings are the same as they are in the original Minecraft: peaceful, easy, normal, and hard. In peaceful mode no hostile NPCs spawn, the hunger bar never depletes, and players regain health rapidly. In easy, normal, and hard mode hostile NPCs spawn and do more damage based on which difficulty you’re on. The difficulty level will also determine how quickly the hunger bar will deplete and whether or not the player can die of hunger. In the normal and hard modes, you drop your items when you die and must relocate them in order to get them back. However, this can be prevented with the keepInventory command, which works in both the original and the MEE. While these difficulties may be useful in certain contexts, peaceful mode is preferable in the classroom. This will allow students to follow the lesson plan without distractions, and also prevent students from harming each other in-game. There are some features which are unique to MEE, such as chalkboards, border blocks, and allow/deny blocks. Chalkboards are used as signs to communicate learning goals to the students. Border blocks act as barriers and prevent students from going beyond where they are placed. Allow blocks let students place or destroy blocks in the area above them, while deny blocks prevent this. These exclusive features are what makes MEE classroom friendly.
Integrating technology into the classroom has many advantages and disadvantages. While MEE was designed with simplicity in mind, there has been negative feedback pertaining to the integration of the program into classes with younger students. It also had a rocky development stage and was met with criticism upon release. That being said, Microsoft has been consistently updating and improving the game while also keeping in touch with the game’s audience. MEE has been shown to help students think differently about problem solving and critical thinking, as well as create a better sense of teamwork in the classroom.[7] Teachers are heavily involved with the creation of lesson plans and can collaborate with their students while still being the supervisor. In conclusion, MEE may not be for everyone but, for those who like to teach in creative settings, it is the ideal program to use.

[7] “Why Educators Should Use Minecraft in the Classroom.” Thinking About Using Minecraft in Your Classroom? | Education World, www.educationworld.com/a_tech/benefits-minecraft-classroom-students.shtml.
Keywords: Game Based Learning, Microsoft, Mojang, Minecraft